Over the last few years, quite a few cases of glass balcony guards breaking have been reported …

Any glass can break, of course, but various kinds of glass might be more or less likely to break. For instance, annealed glass, the kind commonly used in windows, is actually the weakest kind of glass. When any annealed glass breaks, it does so into long and sharp shards. This creates hazardous conditions, as such glass might be used in the construction or design of a door that someone could put their hand through.

It is possible to make stronger glass using a process called heat treating. This process heats annealed glass up to around 700 degrees Celsius before it is ‘quenched’ or cooled rapidly. The surface of this glass is going to cools a lot faster than the interior, and that winds up creating a tension zone on the inside of the glass that contrasts with a compression zone more towards the face of the glass. This adds up to the glass having better resistance to breakage.

In circumstances where an injury might happen from breakage, tempered glass is the common choice.

Given the stresses in glass, as tempered glass physically breaks, it will shatter into minute crystals that have relatively blunt edges which are seriously less likely to cause anyone harm. Given this reason, as well as its enhanced strength, tempered glass sees use in balcony guards.

Glass balcony guards have become more common over the last two decades. Glass is often appealing from an architectural standpoint since it allows for unimpeded balcony views, which picket or panel balcony guards don’t do. Glass also proves affordable, nor does it corrode or need a lot of maintenance, whereas metal guards might need routine painting.

Having read all this, you might wonder why glass balcony guards are actually breaking in the first place.

Nickel sulfide inclusion is one potential cause of glass breakage in cases like this. The process of manufacturing glass involves sulfur, since it helps eliminate bubbles from happening. Unfortunately, glass might get contaminated by any nickel that gets introduced in the process of manufacturing glass if it happens in the actual raw materials, handling, storage, or even the fire brick from the furnaces providing the heat. Just one gram of nickel has the power to contaminate many thousands of tons of physical glass.

At a high enough temperature, like the ones that are necessary for heat treatment, nickel sulfide particles are actually smaller than they are at lower temperatures. Remember how the manufacturing of tempered glass requires rapid cooling? That means that nickel sulfide particles can get trapped in their smaller sizes. Over periods of time ranging anywhere from just a few months to multiple years, the nickel sulfide converts back a larger size and this gradual expansion puts stress on the glass. 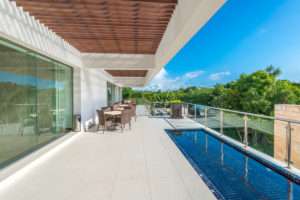 The issue of nickel sulfide inclusions isn’t a new one.

Having said that, as the average sizes of glass balcony panels has grown in recent years, so too has the likelihood of certain panels having inclusion of nickel sulfide in their tension zones.

Opinions vary across the industry as to what might constitute an acceptable rate of breakage.

Of course building and property owners would prefer zero breakage, but in reality, just one or two breaks per thousand panels is still an astoundingly good success rate. Should any building witness more breakage than this, it’s a good idea to seek out professional expertise in figuring what to do to lessen the odds of future breakages.

Another potential source of glass breakage is physical contact. That can be glass to glass or glass to metal. When a glass edge rubs up against any guard post, mounting plate, or even the edge of an adjoining piece of glass, that simple act might cause breakage in the glass.

Breakage might also happen if the glass and metal have a temperature variation or difference during their physical contact.

In order to prevent contact like this, then proper clearances need to be upheld and maintained. This usually happens be mounting the glass onto setting blocks, which might be piece of silicone, EPDM, neoprene, or another elastomeric material. Sealant and/or gaskets might also be used to provide separation between metal supports and the glass they touch. One of the issues that is prevalent with the bigger glass panels now seeing use as balcony guards is the fact that their weight makes them harder to handle, so it’s more difficult to be sure that they have properly maintained clearances once they get installed.

Additionally, as time passes, a glass panel not secured on each side might see shifting in its positioning given the buffeting it takes from wind. Even movement in the entire building structure might impact things. So, even when something is installed correctly initially, there’s still a growing potential for contact breakage over time. Still, something that separates this set of circumstances from nickel sulfide inclusion issues is the fact that panel shifting can be observed readily; it’s often correctable prior to breakage taking place.

Is it possible to prevent glass breakage in general?

While contact breakage is often something that can be spotted and treated in advance, it’s never entirely possible to eliminate any and all nickel sulfide inclusions. That makes it hard to prevent glass breakage in totality. Having said that, a few steps can be used to make sure that there is minimal risk of injury when glass actually does break. 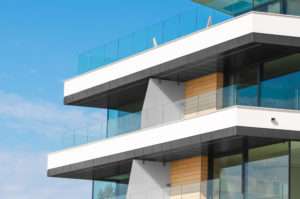 Another thing that can be done is the use of a buffer zone.

This is typically around 20 feet in width and put around the perimeter of any building. Pedestrian access can be limited through the use of planters and other means. If a glass panel were to break, injury could be minimized since no one would be in the actual impact area the glass falls into. Then again, this particular approach might not prove feasible in densely populated and urban areas.

In the last few years, glass balcony panels have had their framing reduced, if not totally eliminated, which could eliminate or reduce the cases of breakage. Of course this means that the pieces of glass needed to be thicker in order to compensate for the framing providing reduced structural contributions, if any. Thicker pieces of glass also means that there are higher odds of nickel sulfide inclusions across the tension zone of the glass. When a balcony guard is designed with metal framing, it means that thinner glass can get used, which reduces the odds of any nickel sulfide inclusions.

In a number of designs, balcony panels get mounted onto the slab face rather than on top. If glass does break, then the glass falls down to the ground. A number of industry authorities maintain the belief that keeping any glass back away from the balcony slab edge might minimize how much glass falls down the ground with the potential to injure someone.

Some newer buildings are using laminated glass for their balcony guards.

An inter-layer of film bonds the various layers of glass together. Since the glass gets held together, it’s far less likely that pieces will fall down to the ground in the event of glass breakage.

On the other hand, this approach only works if laminated glass gets held securely inside the frame. Laminated glass not held on each of its four edges might still fall, and a single larger piece of laminated glass that falls can cause a lot more injury than the smaller pebbles you’d see from tempered glass. For that reason, it is often recommended that structural silicone sealant be used on any exposed edges in order to adhere pieces of laminated glass to their adjacent metal posts.

In cases of retrofit, there are various films that are applicable to glass surfaces which can hold things together in the case of breakage. For application to be done appropriately, any balcony glass needs to be removed from all its supports so that the whole glass surface can get covered with the chosen film, as compared to any glass area inside the framing perimeter. Just like in cases of laminated glass, if film is applied, then glass needs to be secured in place on each of the four sides.

It’s hard to install films like these outside of controlled environments, and given the fact that these films are on glass surfaces, they are susceptible to degeneration over time thanks to the sun’s UV rays. As such, laminated glass is preferable to film application. Although using laminated glass means total glass replacement, which can be expensive.

As mentioned earlier, contact breakage can increase over time, whereas glass breakage from nickel sulfide will go down over time. Property managers are advised to do annual inspections of balcony guards in order to discover possible contact of glass to metal or other glass so that corrective actions can be taken.